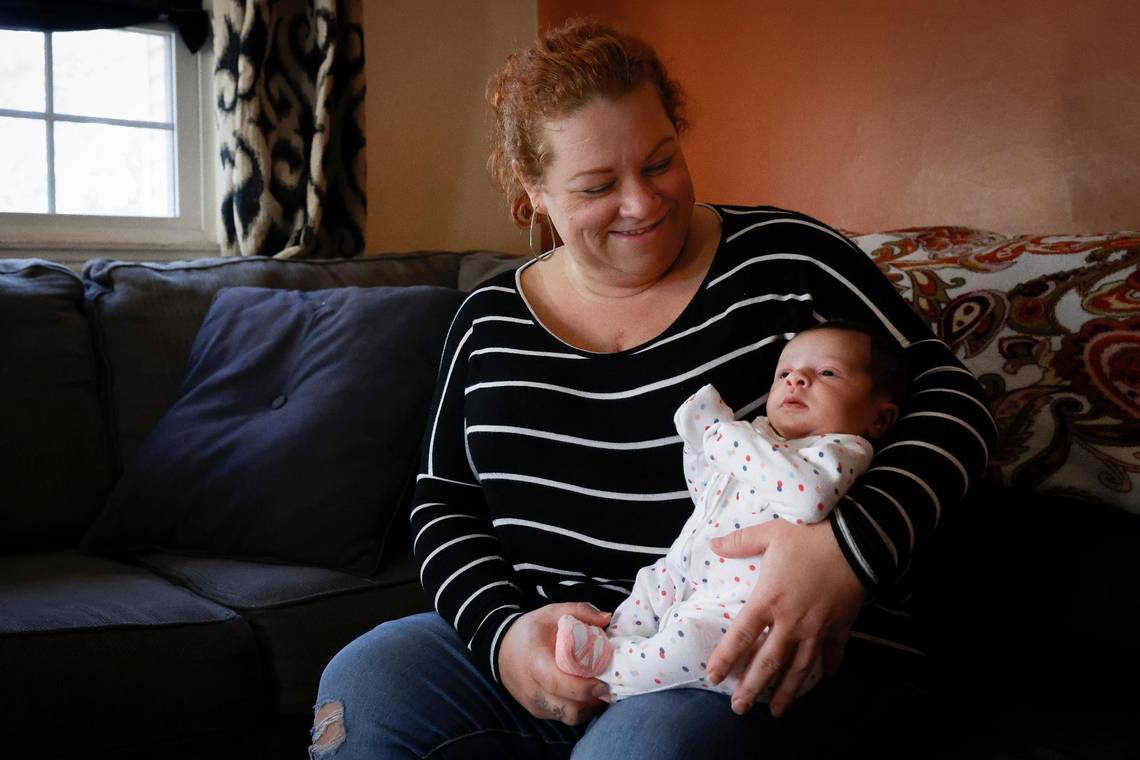 How is it possible for a 43-year-old woman to be sitting here in her living room holding a 1-month-old girl who came out of her womb — even though, just one month and one day ago, this same woman had no idea she’d been growing a tiny human inside of her?

All this in spite of the fact that, for most of her life, she believed she was unable to bear children.

“I really didn’t know,” Erin says, as the dark-brown-haired baby she named Lennox “Lenni” Mae cries up at her. Erin is reflecting on the blindsiding news she received on the morning of Oct. 12, roughly 18 hours before she gave birth via emergency C-section at Novant Health Matthews Medical Center. And, since she seems to feel like those four words are hard for others to swallow, she repeats them.

“I really didn’t know. I definitely was not trying to hide it in any kind of way. So it’s not like I was trying to keep it a secret so nobody knew — you know, I’m not a teenager. I’m relatively intelligent. I can accept a lot of things in my life,” she says, chuckling. “I just did not know. In any way.”

Which, once more, begs the question: How?

‘This is what you were meant to do’

Her younger sister, Amber Mengering, says Erin was born to be a mother.

As the oldest Mengering sibling, Erin helped take care of her two younger sisters and her younger brother for years. But also, Amber says, Erin “pretty much helped to raise every cousin, niece, nephew … because she’s the oldest grandchild in our family. … She helped with everybody. And she has been babysitting since she was 6 or 7 years old. So she’s always been a carer, taking care of others.”

And from a young age, Erin dreamed of being a mom. The universe, however, seemed to have other plans for her.

When she was 16 years old, Erin was diagnosed with polycystic ovary syndrome. More commonly known as PCOS, it’s a hormonal and metabolic disorder that is one of the most common causes of female infertility and affects 6% to 12% of women in the U.S., according to the Centers for Disease Control and Prevention. It’s also treatable, and women who suffer from PCOS can get pregnant — sometimes naturally, sometimes with assistance.

But Erin’s interpretation of her doctor’s diagnosis at the time was that it was highly unlikely for her.

Still, she tried. Before her husband died in 2010 due to complications related to sickle-cell anemia, Erin actually got pregnant twice. Both times, she miscarried very early on.

So she’s found her calling in other ways. For the past several years, she’s essentially made a living as a professional babysitter, providing child care for a number of Charlotte families out of her home on the edge of the Shannon Park neighborhood in northeast Charlotte. Then in 2019, Erin gained full custody of her nephew Mateo and her niece Eva (whom Erin calls Oona, which is Eva’s middle name). They were toddlers at the time, and Erin took on the responsibility of raising them in place of her sister Donna, who was fighting a yearslong struggle with addiction, mental-health issues and run-ins with the law.

The small hole in her heart was still there, though. “I’ve raised kids, and I have kids,” Erin says, sighing. “But they’re not mine. And so it’s not the same thing. … That’s always been lacking.”

On Oct. 11 of last year, Donna lost that battle with her demons at the age of just 35.

As Erin worked her way through immense grief in late 2021 and early 2022, she says she came to fully accept her lot in life: “‘This is what you were meant to do. You were supposed to be there for them,’ and … trying to accept that for myself. ‘This is as close to mothering as I’m going to get.’”

The idea of getting pregnant? She “let it go,” she says. “At this point, you know, 40-plus, it’s over. I didn’t think about it. I wasn’t considering it. I certainly wasn’t trying.”

That’s a big reason why — between the time she conceived, probably in early January, and the moment she found out, on Oct. 12 — Erin missed (or at least misinterpreted) every sign.

The long road to getting checked out

Other women in Erin’s family had gone through menopause early, so when she started missing her period, Erin just figured it was her turn. She chalked up the soreness in her breasts as a menopause symptom, too.

Because she didn’t have health insurance, she wasn’t in regular consultation with a doctor. But midway through this past spring, she called 911 and was transported to the hospital after suffering an allergy- and asthma-related coughing fit so bad, she says, that “I felt my stomach tear.”

She says the medical staff treated only her cough. Erin diagnosed herself, later, with a hernia, based on the feeling in her stomach and the fact that her belly button would periodically pop out. (Her mother, Karen Mengering, says both of her other daughters had had umbilical hernias, and the family figured it was genetic — and an umbilical hernia can, indeed, cause an “outie” belly button.)

As for her weight, Erin says she actually was losing it.

“Because I wasn’t really eating very much. I could only eat just a little bit at a time, because my stomach would swell,” she recalls. She attributed it, again, to the hernia she thought she had. Erin says she weighed about 230 pounds around the time she went to the hospital in the spring, and that she was at 226 when she walked into a local free medical clinic at the end of September hoping to get help with her stomach issue.

Long story short: A GI specialist referred her to a gynecologist, who referred her to Novant Health Matthews Medical Center for a CT scan and an ultrasound. They wanted her tested for uterine issues, such as tumors, particularly since Erin has a family history of cancer. Neither of the free clinic’s doctors thought to check to see whether she might be pregnant.

Erin and her sister Amber pulled up to the hospital for her 11 a.m. appointment on Oct. 12 thinking it would be quick enough that Amber could just wait in the car, and they could head out straight from there for a trip to Hobby Lobby and lunch.

They never made it to either place.

‘There’s a baby in there’

At first, Erin thought she was going to get the news that no one ever wants to get.

“They did their scouting image,” she recalls, and left suddenly. “I was in there (alone) for a long time. I started to fall asleep. Then finally everybody came back in and he’s like, ‘Ms. O’Malley, um — we found something on your scouting image.’ Which, immediately, my heart sunk.”

Oh, no, she thought. It really IS cancer. They found a tumor so big that they don’t even need the formal scan to see it.

Instead, the doctor said something about a hundred times more shocking: “There’s a baby in there.”

She looked at him as if he had two heads, maybe three, and just said: “No.”

“I was arguing with him,” she says now, laughing, “for like a good 10, 20 minutes. And everybody’s just standing there surrounding me, staring at me, and I’m like, ‘NOO. NO, NO, NO! It’s IMPOSSIBLE!’ … I had to literally sit there and think, I conceived when?? Like, I don’t even remember what was going on in December and January.”

She was immediately sent to have the ultrasound, and at some point her mind flashed to it: the time last winter when she was with “somebody I have been very, very close to for years” — though she says a baby is “not something he would have given me on purpose.”

Meanwhile, a pair of nurses started doing the ultrasound. There seemed to be a lot going on, but they were saying virtually nothing.

“They weren’t showing me the picture,” Erin recalls. “Nobody’s telling me how far along I am. If everything’s OK. What’s going on. I was freaking out.”

Next thing she knew, she was upstairs in the hospital’s labor and delivery unit, which is where she was greeted by Novant obstetrician Greg Reynolds. In a figurative sense, she was still trying to pick herself up off the floor after being bowled over by the news; and then Dr. Reynolds knocked her right back onto it.

“I said, ‘Your blood pressure’s up, you’re full-term based on the ultrasound … it’s time to deliver,’” Dr. Reynolds recalls. “So we admitted her to the hospital and I was like, ‘You’re having a baby!’”

For the 17th time, Erin swears that she didn’t know. Her sister Amber and her mom Karen, they swear it, too.

Dr. Reynolds believes them all.

“It certainly is rare,” says the doctor, who has been with Novant for 15 years. “We see it more commonly where someone comes in 20-something weeks and didn’t know they were pregnant … or someone’s having abdominal pain and goes to the bathroom and has a baby that’s pre-term. … But I, yeah, certainly don’t recall (anyone) full-term coming in. Certainly not in labor.

Asked whether he thought Erin was in denial, he says: “No, not at all. … I think she was completely oblivious.”

Asked for his read of how she appeared to react when he told her what was going on: “I mean, she just was in shock.”

Today, having had more than a month to process it, Erin’s shock is finally starting to wear off, replaced by overwhelming feelings of joy.

“She is beyond happy,” Amber says of Erin. “We all are. And it’s so special because we lost our sister last year on October 11th; we found out Erin was pregnant this year on the 12th; and she actually had her C-section on the 13th. So it was one year to the day after my sister died when we found we have this new life in our family. It’s wonderful.”

“I wish I could have had all that time to experience being pregnant,” she says. “Get ready. Prepare. Be happy, and enjoy it. I didn’t get any of that.” But more so, she’s grateful. “For the way that she came to be, and that she’s perfectly healthy. And both of us survived. I had preeclampsia. We have competing blood types. So that alone could have taken her, or me, at any time.”

There’s also the fact that she just so happened to have that appointment for a CT scan and an ultrasound. “If I had been at home, I could have delivered at home. I could have had a stroke. It’s hard to say. Me and my niece (now 5) and nephew (now 6) would have been here by ourselves. … So many things could have gone wrong.”

And while she does wish Lenni’s father wanted to be a part of their lives, she says she’s at peace with doing this on her own.

“Maybe things’ll change. But even if they don’t, I have been given the greatest gift he could have ever possibly given me — even if he didn’t intend it,” Erin says, once more smiling down at Lenni, still looking just a little bit like she doesn’t quite believe what she’s holding onto.

“It’s not gonna be easy. I’m tired … but I don’t care how tired I am. This is the most amazing thing that’s ever happened to me. And I couldn’t be anything but grateful.”