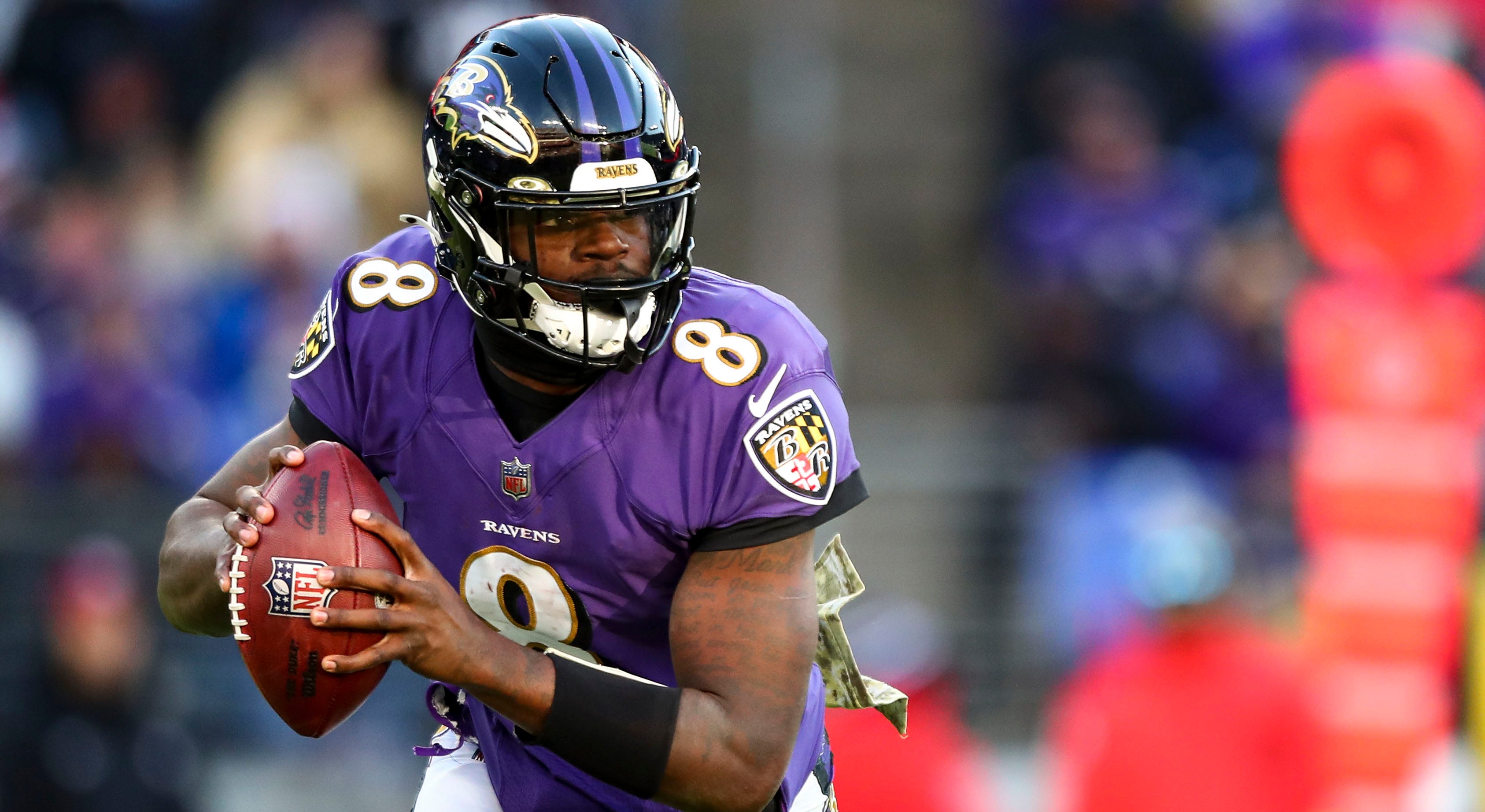 
Lamar Jackson and the Ravens were struggling to reach the end zone — until Baltimore’s takeaway-happy defense made that task a good bit easier.

Marcus Peters forced a fumble in the fourth quarter — the first of three Carolina turnovers in the final 8:14 — and Jackson took advantage of the short field, scoring on a 1-yard run that helped Baltimore hold off the Panthers, 13-3, on Sunday.

“For us to be able to kind of turn … back into being a turnover-creating defense is really a big deal,” coach John Harbaugh said. “We’ve got some guys that are ball hawks.”

Mark Andrews (89) of the Baltimore Ravens breaks a tackle during the fourth quarter against the Carolina Panthers, Nov. 20, 2022, in Baltimore, Maryland.
(Kevin Sabitus/Getty Images)

Baltimore improved its turnover margin to plus-9 on the season, and the Ravens (7-3) now have at least one takeaway in 12 straight games.

Justin Tucker kicked two field goals, including a tie-breaking 37-yarder with 8:27 remaining. Then Peters forced a fumble by Panthers receiver Shi Smith, giving the Ravens the ball at the Carolina 31. Baltimore finally scored the game’s lone touchdown with 7:16 to play.

“We turned the ball over in our own territory. The defense is playing great up until then,” Panthers quarterback Baker Mayfield said. “That set them up for their first touchdown. That’s on us. One, we didn’t make enough plays. Two, in that second half, we have to protect the ball a little bit.”

UVA SHOOTING UNDERSCORES THE WORK NEEDED TO BE ‘DONE TO RID OUR SOCIETY OF GUN VIOLENCE,’ NFL PLAYER SAYS

“How about JPP catching that pass?” Harbaugh said. “He said, ‘I’ve always had great hands.’ So, that was kind of fun and funny.”

Pierre-Paul lost an index finger in a fireworks mishap that also damaged the thumb and middle finger on his right hand in 2015.

Baker Mayfield of the Carolina Panthers passes during the third quarter against the Baltimore Ravens, Nov. 20, 2022, in Baltimore, Maryland.
(Rob Carr/Getty Images)

The AFC North-leading Ravens won their fourth straight despite being stuck in neutral offensively for much of the game. Jackson threw for 209 yards with an interception and Demarcus Robinson caught nine passes for 128 yards, but that was about all that was working for either team offensively on a chilly, windy day in Baltimore.

The Ravens, who have led every game this season by double digits at some point, have had some rough fourth quarters — but this wasn’t one of them. Baltimore drove 67 yards in 12 plays to set up Tucker’s second field goal and then Jackson’s TD gave the Ravens a 10-point lead that felt pretty safe.

Prior to that, Humphrey might have scored on Smith’s fumble if the play hadn’t been erroneously stopped — before officials eventually ruled it was a turnover.

“We wanted to have a goose egg today,” Humphrey said. “You can’t be too mad with three, but we’re really trying to chase Ravens defenses in the past that have shown elite greatness.”

Jackson was intercepted once during a first half that remained scoreless until Tucker kicked a field goal on the final play.

Lamar Jackson of the Baltimore Ravens drops back to pass during the fourth quarter against the Carolina Panthers, Nov. 20, 2022, in Baltimore, Maryland.
(Kevin Sabitus/Getty Images)

Mayfield, a familiar opponent for the Ravens when he was with Cleveland, threw for 196 yards for the Panthers (3-8). D’Onta Foreman was held to 24 yards on 11 carries after rushing for 389 and four touchdowns in the previous four games.

Baltimore improved to 12-3 under Harbaugh when coming off an open date, tying Pittsburgh for the best mark in the league in that span.