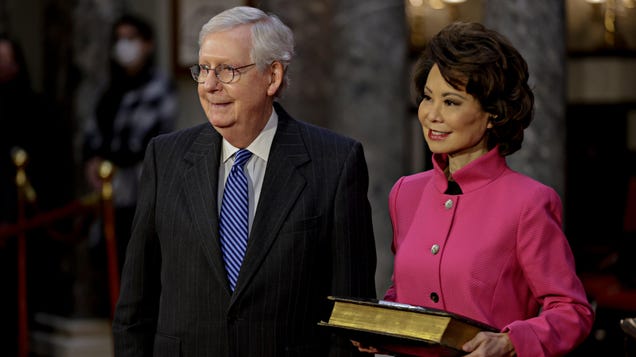 
Senate Minority Leader Mitch McConnell (R-KY) is a man who contains multitudes, apparently. McConnell voted to block the Respect for Marriage Act on Wednesday—a bill that protects some rights for same-sex and interracial married couples—despite being in an interracial marriage, himself. McConnell is married to former President Trump’s Secretary of Transportation, Elaine Chao, the first Asian American woman ever to serve in a presidential cabinet.

Nonetheless, the Senate voted to end debate on and advance the Respect for Marriage Act by a filibuster-proof 62-37 margin, which included 12 Republicans. The legislation stops short of enshrining a federal right to same-sex marriage; instead, it requires states to respect same-sex and interracial marriages that are currently legal, in the event that the Supreme Court overturns Obergefell v. Hodges or Loving v. Virginia, which established federal rights to same-sex and interracial marriages respectively. In Supreme Court Justice Clarence Thomas’ opinion concurring with the court’s decision to overturn Roe v. Wade in June, Thomas (himself in an interracial marriage) appeared to eye marriage rights next.

McConnell’s vote against the Respect for Marriage Act is especially baffling given his own stakes in the issue—though, let’s be real, he’s hardly the first Republican to vote against his own self-interest out of spite. Chao is the first Asian-American woman to have served as secretary of transportation. She was born in Taiwan and immigrated to the U.S. as a child. She is also, notably, McConnell’s wife.

In addition to protecting presently legal same-sex and interracial marriages, the Respect for Marriage Act grants significant leeway to faith-based groups to discriminate against same-sex couples to their hearts’ content, prompting even the literal Mormon Church to back the bill. If protecting the legal status of his own marriage weren’t enough for McConnell to vote yes on the bill, I figured at the very least, the sweet, sweet right to discriminate against LGBTQ people might convince him to back the bill. It didn’t!

There are a lot of reasons McConnell might have benefited from voting yes purely out of self-interest, but it turns out the bill’s symbolic support for same-sex couples was just too much for the Kentucky Senator. Maybe Ben Shapiro’s recent sermon about how aliens in outer-space surely oppose same-sex marriage really got to him?

You almost have to wonder if far-out, extremist stances like still being against same-sex and interracial marriage are part of the reason McConnell retained his title as Minority Leader this election cycle!