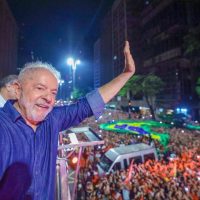 “It was a victory won by perseverance, humility, faith in justice and, above all, it was a victory for the courage of the Brazilian people to face the future with them, towards a stronger and just country,” said Nyusi in a social media post.

“Mozambique has always shared with Brazil the most remarkable moments of its history, and vice versa, as brothers who share a path whose fate guides them to welfare and justice. Thus, my congratulations are also from the Mozambican people to the Brazilian people, in this new walk of hope.”

Adding to the well wishes from Africa’s Lusaphone nations was South Africa, with whom Brazil shares BRICS membership and historically close ties.

“South Africa looks forward to working with the government of Brazil under the leadership of Mr. da Silva,” said President Cyril Ramaphosa.

Lula won the election with 50.9% of the vote, according to official results from Brazil’s Superior Electoral Court (TSE). He’ll return to the presidency, which he previously held from 2003 to 2010. Lula was sentenced on corruption charges in 2017 and 2018, but was freed in 2019 and saw those convictions overturned in 2021.