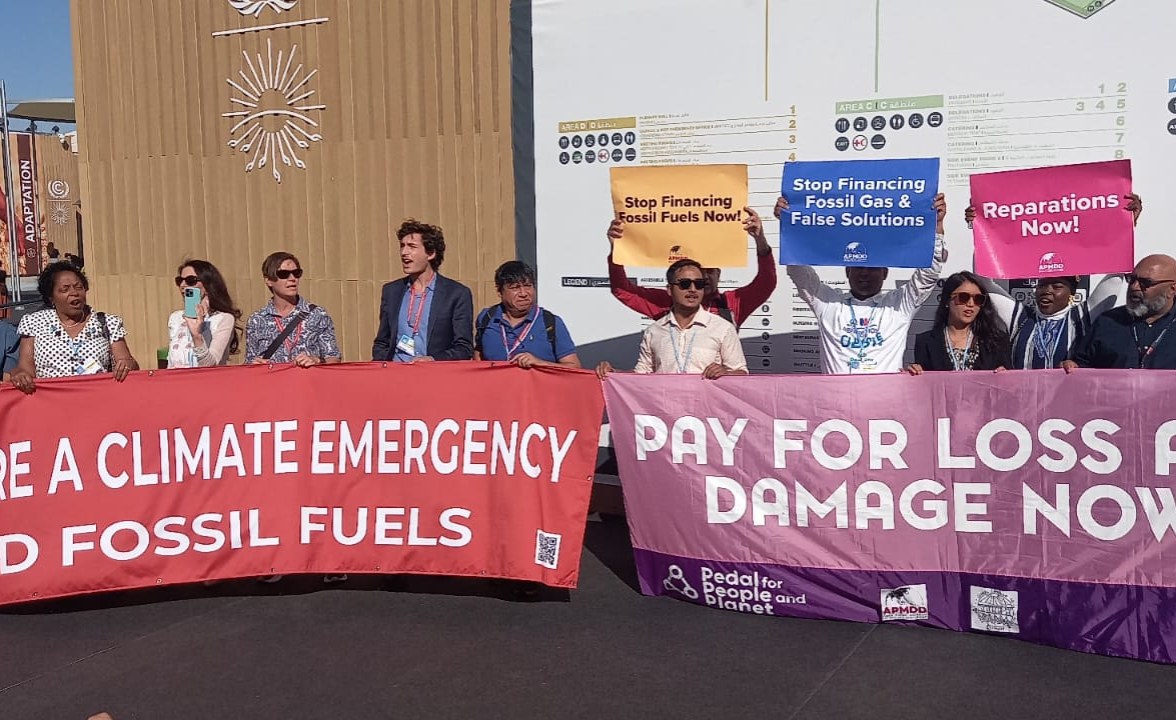 
Sharm el-Sheikh — The science is clear – using fossil fuels is pushing us beyond the planet’s ability to sustain life. Experts say there are nine planetary boundaries we need to respect for life on earth to continue but despite all these dire predictions, governments and multinationals are still pouring millions of dollars into fossil fuel extraction at a time when we need an urgent transition to renewable energy.

Lephalale is a coal mining town in South Africa’s Limpopo Province and it’s residents have had enough. The state-owned power utility’s Medupi power station has caused much destruction not only of the land, but has had an impact on the health of the community as well. Lucy Duba, an activist from the Lephalale community, spoke to delegates at COP27 about the challenges they face. “Living in Lephalale is like living in hell. “We inhale dirty air every day and no one is doing anything about it. We have had enough.”

When the Medupi project came to their area, they were told that it would change their lives. “We were so happy because we were poor, not working, and thought that our lives would change for the better. But only to find out that this is the beginning of our problems.” In 2010, the late minister of environment affairs Edna Molewa declared Lephalale as a priority area in terms of air pollution. “People were hungry for jobs so they continued to build Medupi,” she said.

Impoverished communities are won over with promises of jobs and development when mining and large infrastructure projects are proposed for their areas, but they are the ones left to carry the burden of environmental and health costs with little government or private sector support. “They promised that they will install technology so the emissions does not affect people. But it is 11 or 12 years down the line and we’re suffering. There’s no technology. Even the banks or governments can’t come to us as the affected people to tell us what happened to the promise of technology because we’ve been waiting for it. We’re dying and really badly affected.”

In March 2022 a ruling in South Africa’s Pretoria High Court saw a landmark victory for communities long affected by coal fired power stations in the Highveld Priority area. The court affirmed that communities have a Constitutional right to clear air in a move that forces the government to take action to protect the health of local communities. The “Deadly Air Case” was brought to court by environmental justice groups groundWork, and the Vukani Environmental Justice Movement in Action, who were represented by the Centre for Environmental Rights.

Activists are Calling for End to Fossil Fuels

Climate change activists around the world are coming together with one voice, chanting “STOP FUNDING FOSSIL FUELS!”. They have made it clear that they want big polluters out of climate talks and are calling for sustainable ways to increase energy by supporting renewable energy plans.

However, it seems their calls are falling on deaf ears. At least 636 fuel lobbyists have registered for COP27, according to Global Witness, with campaigners described the findings as a “twisted joke.” BBC reports that “the data shows that this year, there are more fossil fuel lobbyists than total delegates from the ten countries most impacted by climate change, including Pakistan, Bangladesh, and Mozambique.”

The UN’s Intergovernmental Panel on Climate Change has made clear in its report that even just using the existing fossil fuel infrastructure would already push us beyond 1.5 degrees of warming from pre-industrial levels. The International Energy Agency has warned that new investment in oil, gas, or coal projects is not compatible with reaching net zero by 2050.

Africa is already heating up twice as fast as the rest of the world, and each moment takes us ever more dangerously beyond the 1.5C threshold. African nations generate the least (less than 3%) of all greenhouse gas emissions but are suffering the most and have fewer resources to adapt to climate change. The cost of adapting to climate change on the African continent is estimated at U.S.$15 billion each year. This is frustrating because the nations in the most precarious position are also the least responsible for climate change.

Extreme climatic events like heatwaves, cyclones, fires, droughts, floods, and desert locust invasions, which are happening more frequently and with more severity, are driving millions into hunger and poverty. It is estimated that by 2050, at least 1.2 billion people could be displaced globally due to climate disasters.

Communities like Lephalale are crying out for climate justice.

They released a report based on the findings of the policy assessment of six Public Finance Institutions (PFIs) in Southern Africa. According to the report, PFIs continue to play a significant role in supporting the fossil fuel industry. Southern Africa is endowed with natural resources, such as coal and gas which puts it a risk of further energy exploitation, even though we face a catastrophic climate emergency.

“I nearly cried when I see those names of the banks because all I see are problems. They’re the ones that are bringing problems to our lives. When Medupi came to our area, the politicians and the banks told us this is a big development. This thing of fossil fuels, we’re done. We want renewable, or something that will be inclusive. No one must be left behind”, Duba says.

This story was produced as part of the 2022 Climate Change Media Partnership, a journalism fellowship organised by Internews’ Earth Journalism Network and the Stanley Center for Peace and Security.